A guest post by Mary Harris - The children of North Walls School show they care for their beach. 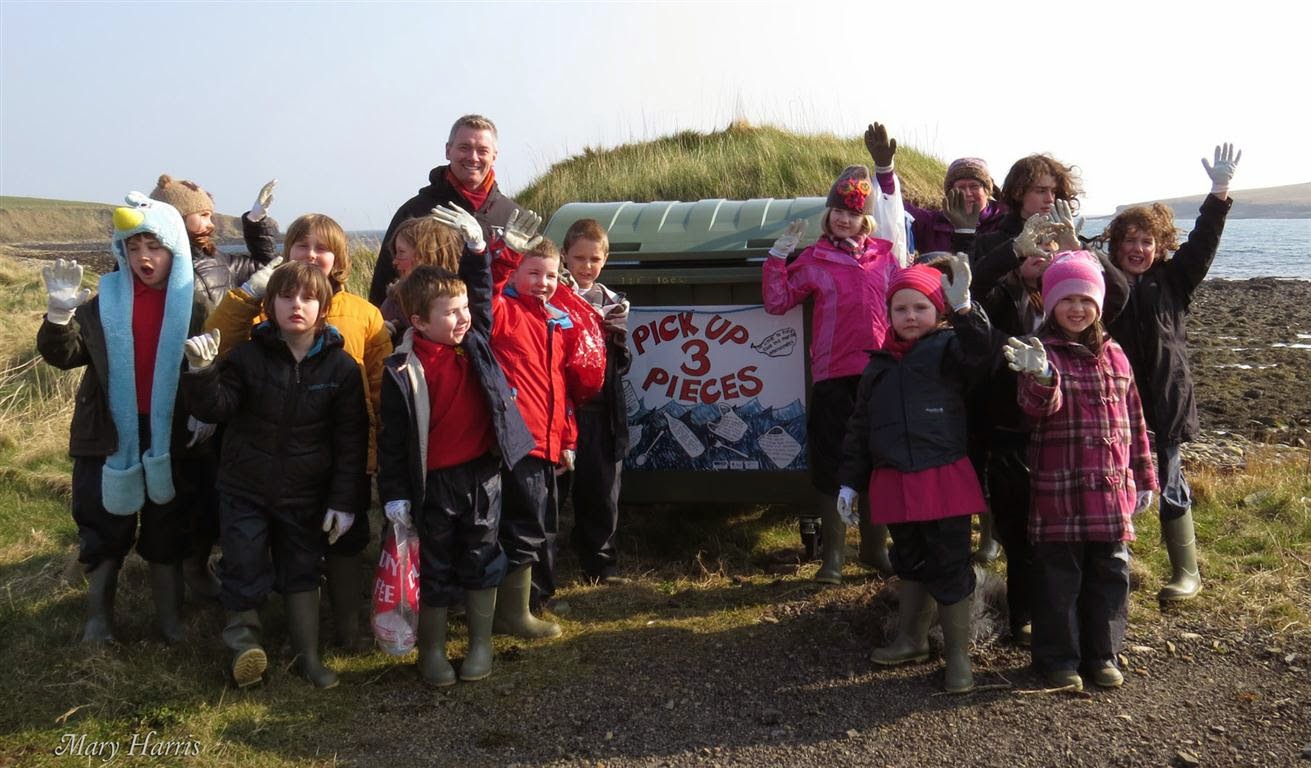 Thanks to the Pick Up 3 Pieces campaign, we now have a large bin for beach rubbish installed at The Ayre, a causeway near Longhope. On both sides of this road are very special bays, delightful in many ways with some interesting flora, fauna and geology. On the south side a stretch of glorious sand attracts both local and visiting folk, be they walkers, paddlers, seal watchers, fishermen or just beach lovers and in a certain light the sea sparkles in exquisite turquoise hues. Occasionally we are lucky enough to see orcas or basking sharks enter the bay.  Across the road on the other side is the more sheltered North Bay, rich in various shell fish and marine life, it is important to many birds including ducks, divers and waders. 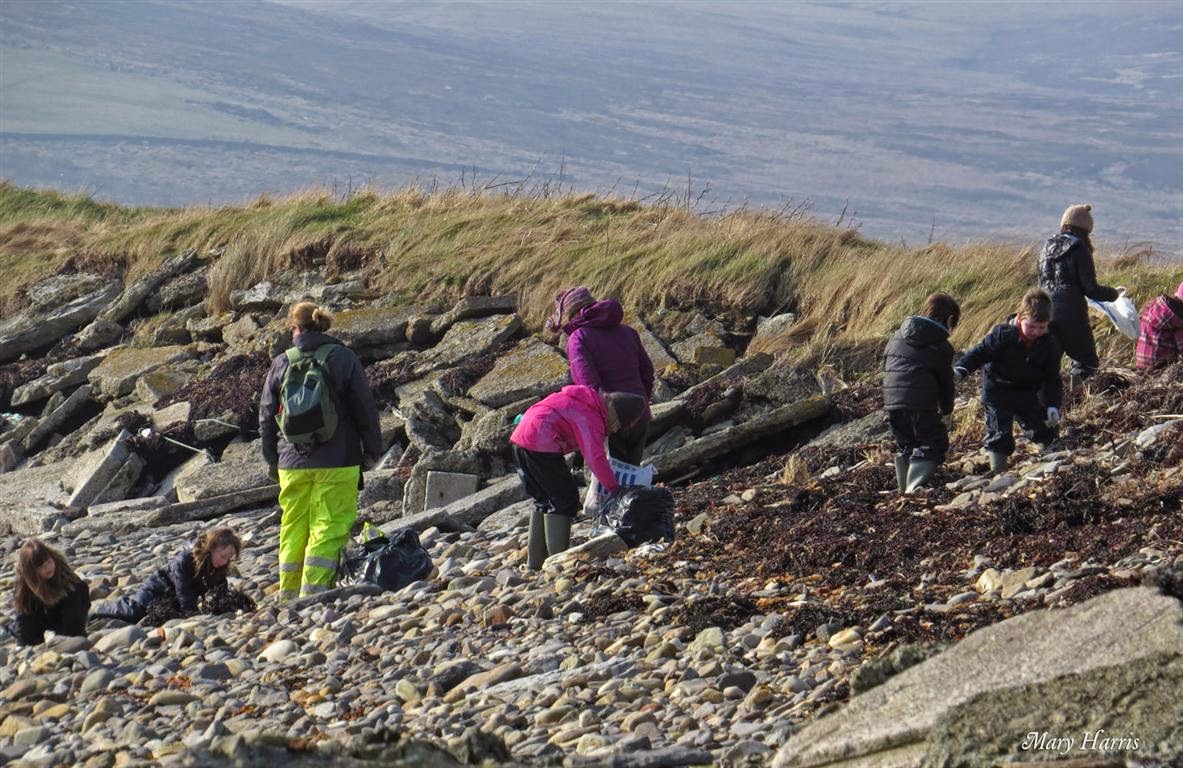 The  south bay known as Aith Hope opens out into the Pentland Firth and unfortunately some of the rubbish that drifts about in the open seas can find its way onto our lovely beach. Winter storms also bring in seaweed and much of the rubbish ends up tangled amongst this tide line. Some of this bruck travels a long way, for instance I have found lobster cage tags from Maine, USA and milk cartons from Norway. Dedicated Bag the Bruckers annually clean up as much rubbish as they can but the problem is constant. 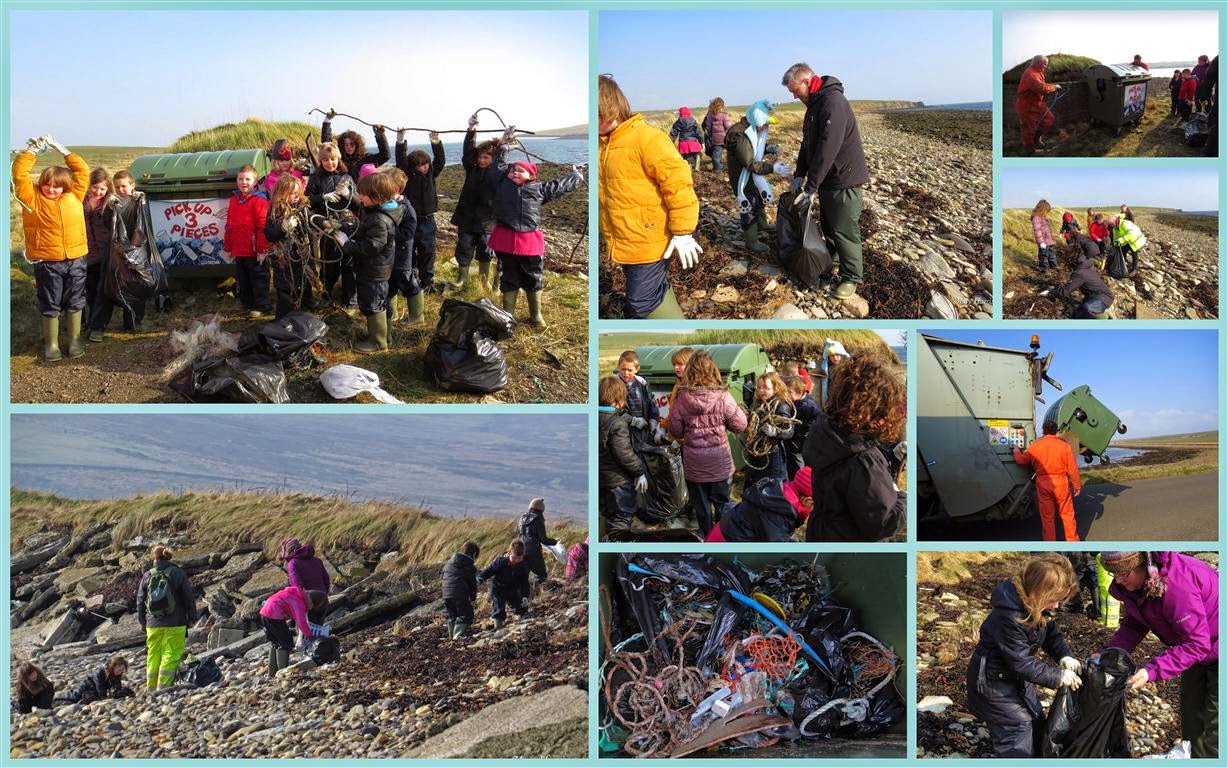 Part of the PU3P campaign is to visit local schools and discuss with the children sea life, tides,  drifting patterns and  the issues and problems associated with marine litter, especially plastics, on our natural environment. The children of North Walls School recently had a visit from Lesley Mackay, founder of PU3P. Teachers and assistants then organised a trip to the beach for the children so they could put into context what they have discussed at school. 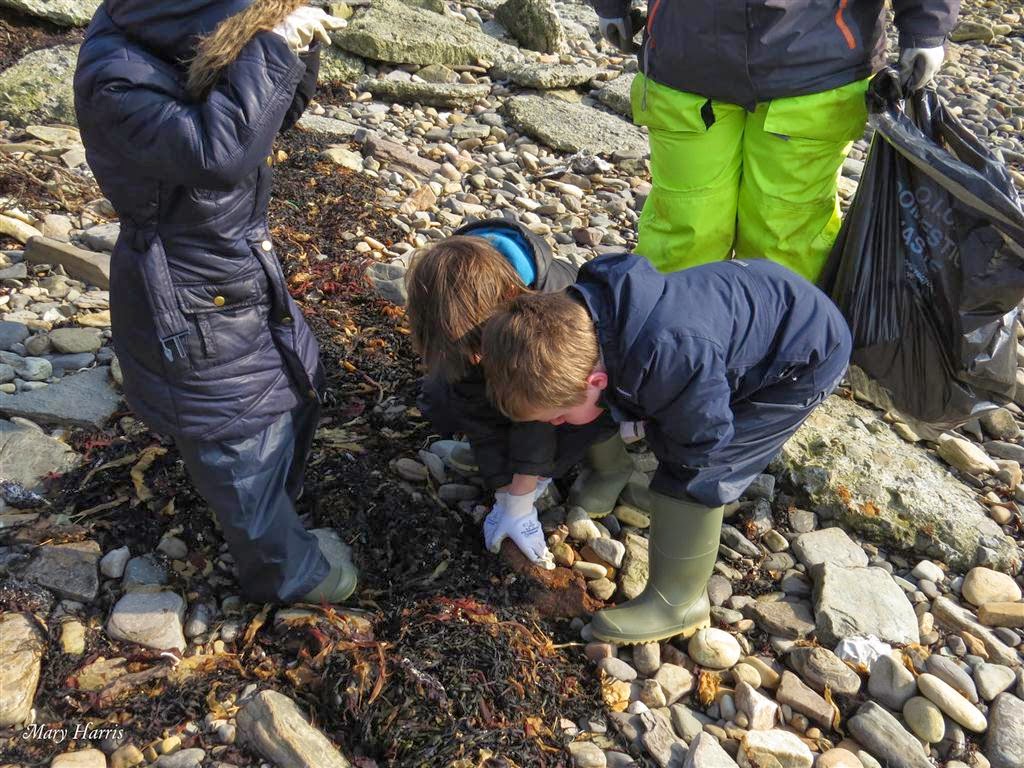 It was great to meet them on the shore and help them with the task in hand. Their enthusiasm and interest is a credit to their teachers and Lesley. They scurried about picking up stuff from the tiniest pieces of string to a welly boot, shotgun cartridges, rope, net, half a pair of spectacles, bottles and other plastic detritus. Two young girls sat in one place for a long time and sorted with utmost care through the seaweed picking out every piece of plastic they could see. While other pupils charged about more randomly picking up whatever caught their eye. I heard a teacher encouraging them by giving them a challenge like 'find six blue things' or 'three round things'. I thought this a great idea as too much choice confused the issue and rather than run about not knowing where to start they had a point of focus. I watched two small lads make a gallant effort to raise a large lump of old iron, that has laid half buried in the sand for decades. 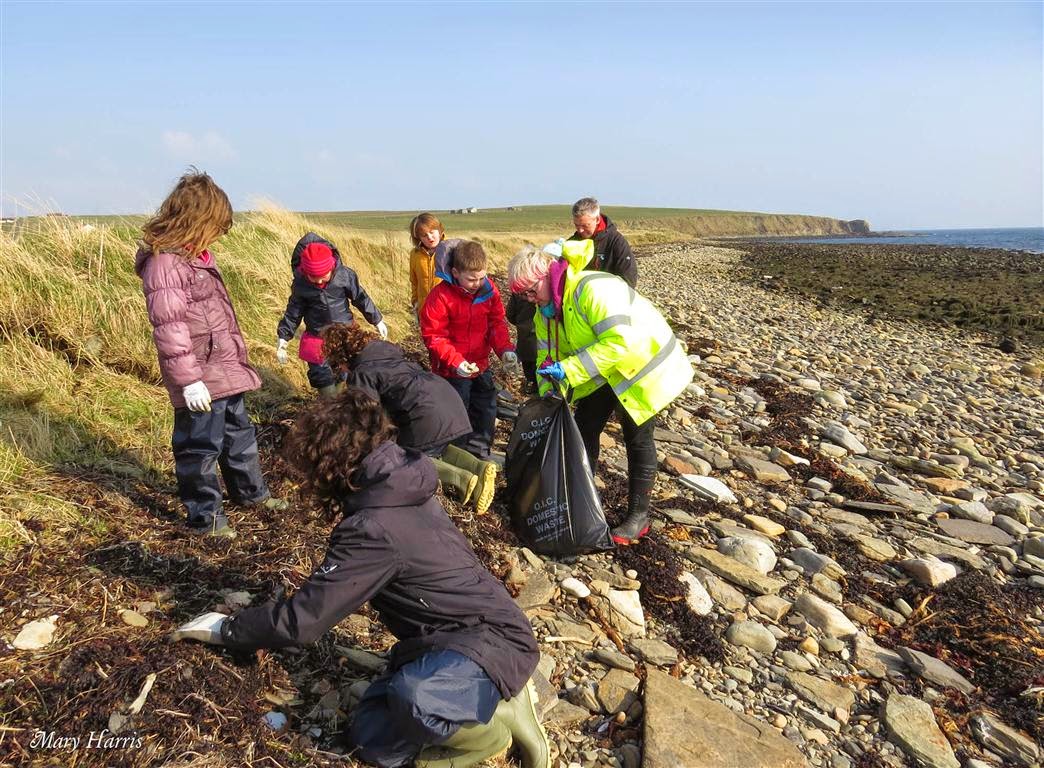 In no time at all they had filled up their bags and it was back to the bin, some children dragging long lengths of rope.   Before dumping it all in the bin the booty was examined and the children rightfully praised for their outstanding effort. Co-incidentally it happened that it was bin day and the lorry turned up just at the right time. So they were able to watch the bin being hoisted up and the rubbish safely dumped inside the truck. I think for one or two children this was the icing on the cake! 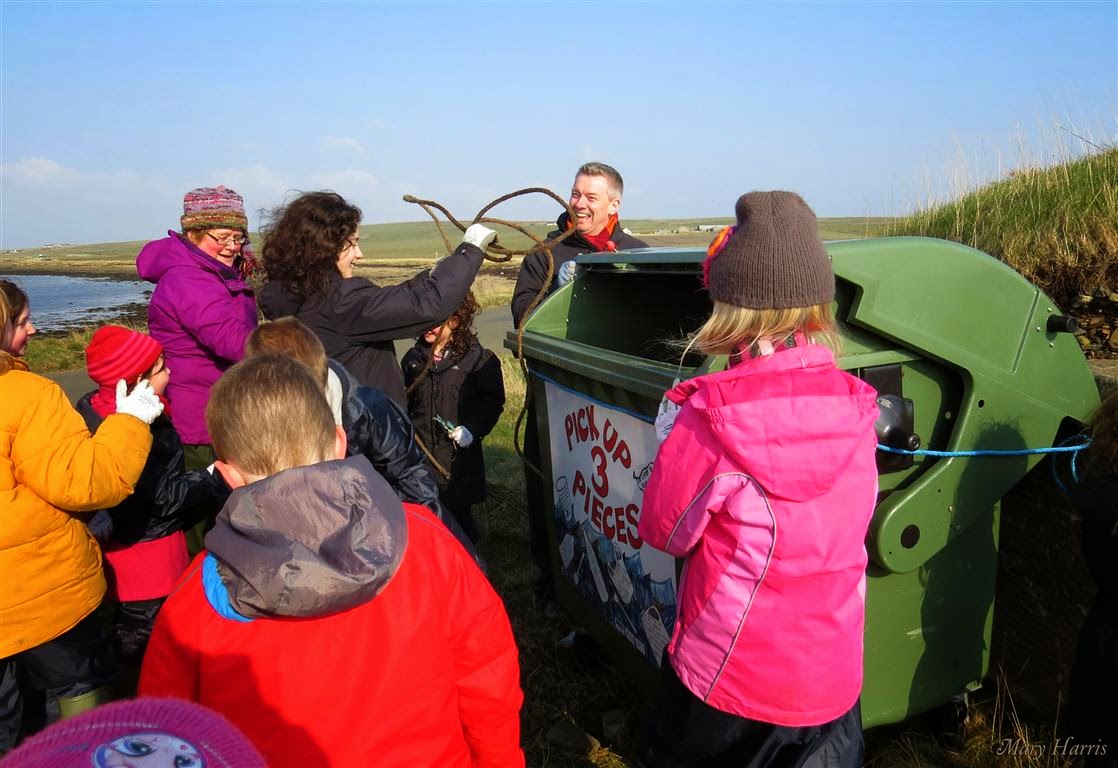 So it is a step forward for our community to have this prominently placed bin with eye catching sticker. We hope it will stimulate future beach goers to follow the example our school children magnificently set and to pick up some rubbish and dispose of it in the bin.
Well done and thank you children, we are very proud of you all.
Email ThisBlogThis!Share to TwitterShare to FacebookShare to Pinterest 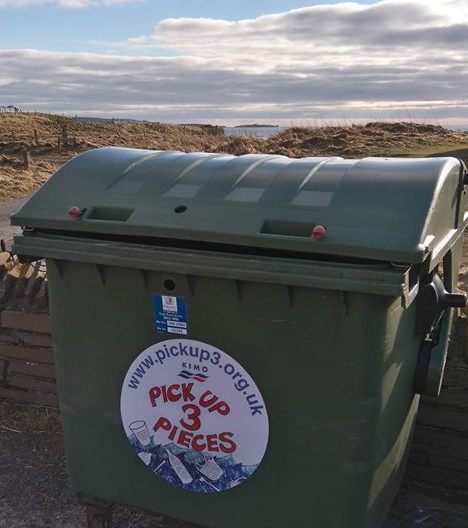 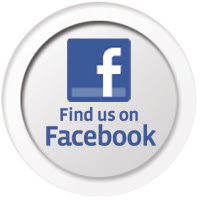